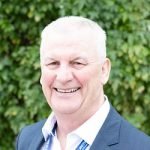 DAVID McDonald is taking his drive for giving back to the community to a new level.

The executive has moved to Ardrossan from regional Victoria to become Yorke Peninsula Community Transport’s new general manager, following on from Julie Mason’s 17 years in the top job.
“The job jumped out to me because I saw the service and I have my own personal set of values and clearly the organisation has very strong values in the community,” David said. “One of my key values is making a difference and giving back so I thought there was a strong alignment and it was the job for me. I’m excited to go to work … it’s going really well, there are massive opportunities and I’m thrilled by the people I meet and their commitment to give something back.”

David said he is looking forward to helping the organisation grow in certain aspects including branding and awareness. “Some people wouldn’t be aware of what we do or who we are,” he said. “One of the challenges will be a name change but I don’t think this will be the most important (thing). I think there is an opportunity to expand our services and grow. I think we can take some
of the strengths we have into other parts of the state.”

David said one of the benefits of getting the job is he could live anywhere on the peninsula. “When I looked up Yorke Peninsula, I thought to myself ‘I get to live there’… I think Yorke Peninsula is one of the best kept secrets within Australia,” he said. “I enjoy working with people, I love learning from them and the opportunity to learn and give back is the reason I came here.”

Yorke Peninsula Community Transport is a vital service for the region, which has an ageing population. “There is a lack of work opportunities so people’s children leave to go to Adelaide or other states and leave the parents behind,” David said. “At the tail end of people’s lives, it becomes difficult because their children have moved on and they can’t spend as much time as they would like with their parents. That’s where we come in and we can actually do some of the things the kids can’t do which is very rewarding for us.”

David brings more than 30 years’ experience working in executive roles across radio broadcasting, not-for-profit, manufacturing and engineering sectors. Amongst his many roles are general manger at the ACE Radio Network in regional Victoria, CEO for Variety Queensland, director of the Melbourne Royal Children’s Hospital Good Friday Appeal and the Gallipoli Medical Research Foundation at Greenslopes Hospital, Brisbane. He is also known for his achievements in the media as general manager of the Fairfax Radio Network in Brisbane where he turned the business
around from a loss-making organisation to a profitable one.

David was recognised with an Australian Commercial Radio Award as Metropolitan Station Manager of the Year in 2007.

To find out more about YP Community Transport, visit www.ypcommunitytransport.org.au.